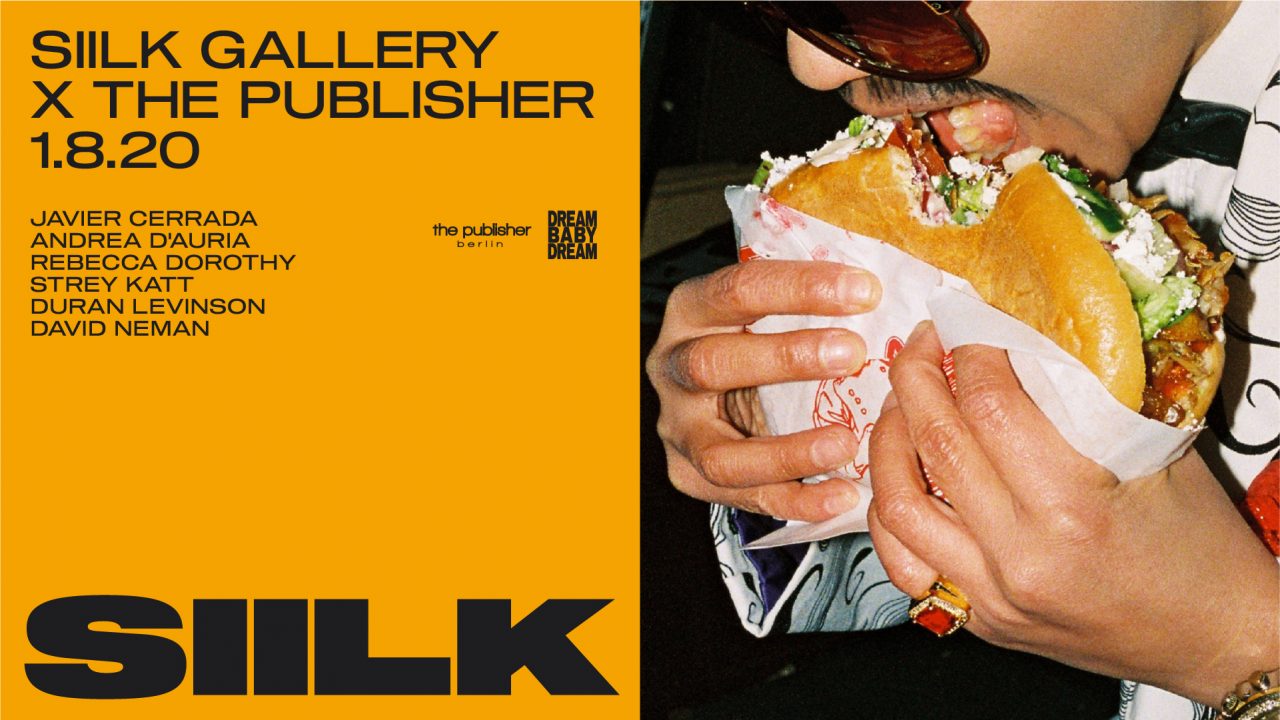 Siilk Gallery (Athens) in collaboration with The Publisher is hosting a pop up exhibition featuring photographers from around the globe, currently based in Berlin.

We haven’t been back to Berlin during the summer for a long time and wanted to exhibit friends old and new in the city we love!

Works on show by:

Influenced by his work as a graphic designer and his experiences within punk subcultures, he catches the vibrations of the city’s margins and mavericks.

He depicts raw realities through rare compositions that channel Renaissance, Surrealism or Pop Art and plays with the sacred, revealing beauty in the transient space between people.

Born in Rome, Italy, in 1989 where he studied Visual Communication & Advertising. Finishing this he later moved to Berlin. D’Auria attributes much of his art and inspiration to Berlin and its underground scene. The Italian photographer’s work is rich in subtle critiques and aims to emphasize unacknowledged beauty. D’Auria’s photography strives to be unapologetic in its authenticity.

Duran Levinson is a South African photographer, director and cinematographer currently based in Berlin. Duran is an extremely passionate all round visual artist and creator.

He has had works published internationally by magazines, online editorials, campaigns, music videos, advertising and in books, the list goes on.

He began his career working in visual effects departments for the Hollywood TV and Film industry.

While living and working in China, Russia and Germany he created content for the likes of Vice, Adidas, Wasted Paris, Volchok, New balance and many more. He has published 4 books, exhibited around the globe as well as touring with the likes of Sam Fender and Frank Carter.

Javier Alejandro Cerrada was born in Caracas, Venezuela in 1988, based in Berlin since 2014.
When he was five his grandmother was diagnosed Alzheimer Disease. Since then, he knew that there was always the genetic possibility to start forgetting everything. He got his first camera at 7, a spy-toy camera with 110 film and no flash. Starting from there, till today, he never stopped taking pictures.

He went to university and started working with fashion/lifestyle magazines and sport newspapers as a graphic designer and eventually art director, but never as photographer. He kept taking photographs, but as a diary, as an obsession to keep track on places, people and moments. At this point he was shooting with a Regula Picca C, 35mm film, which his great uncle left to him after he passed away. During that time, his interaction with photography was very private and emotional. Shooting from bucolic landscapes, portraits of friends in intimate moments or snapshots of emotions.

Javier started to be more selective with what appears in the viewfinder. Without noticing he became an observant and student of the tropical light. He began to research more actively, an artistic point of view of visual capacities and the power of the camera. He became obsessed with the work of painter, Armando Reveron and wanted to imitate his appreciation for the light. Painters are now his first approach to photography.

After learning that great impressionist masters used photographic techniques to aid their paintings he grew an absolute sense in connecting both mediums.

After moving to Berlin, his photographs quickly became impregnated with the celebration of the barbaric, crazy fun city, in combination with his sensibility for light. He started shooting much quicker and developed a photographic incontinence. At this point for the first time he saw photography not only as a personal hobby to cope with anxiety but more as a life long labor for the ones that really want to see. From this moment on he decided to make film photography his life’s work, medium of expression and a tool for him to investigate the world as he sees it.


Rebecca Dorothy explores the body and sensuality in a overwhelming sea of colors, focusing first on her own body with the many self-portraits then entering into the most intimate and secret moments of lovers , friends and acquaintances. Her pictures tell stories, merging between reality and fantasy, love and passion, nudity and costume.

StreyKatt aka Bobby Collins, is an artist, born in New York, USA, and is based in Berlin, Germany. Using analogue photography, as his main medium, since 2007, along with video, and prosaic writing, his self-taught education in and experience with the medium, stems from having worked alongside high-end fashion, entertainment and advertising photographers, during the 1990’s onwards.

Strey Katt aka Bobby Collins, is an artist, born in New York, USA, and is based in Berlin, Germany. Using analogue photography, as his main medium, since 2007, along with video, and prosaic writing, his self-taught education in and experience with the medium, stems from having worked alongside high-end fashion, entertainment and advertising photographers, during the 1990’s onwards.

Neman was born in 1986 in Veberöd Sweden and has been based in Berlin since 2014, he studied photojournalism at Mid-University in Sundsvall.

David started to take photos at an early age while documenting his friends, graffiti and skateboarding. His artwork tends to focus on his surroundings with friends and family. Often also trying to take a critical view of society within his works.
His imagery deals with the restlessness, the absurd things you laugh at, and the tragic things you feel for.

He strives to produce projects with an inside perspective and not to be a stranger, but to participate. Mixing private & personal work with snapshots from the streets, David investigates and learns about life and the people he meets through photography.

* Please take precaution, respect others and come with Covid-19 etiquette. You know the drill! ❤